An inspiring tale of an Uber driver turned techie 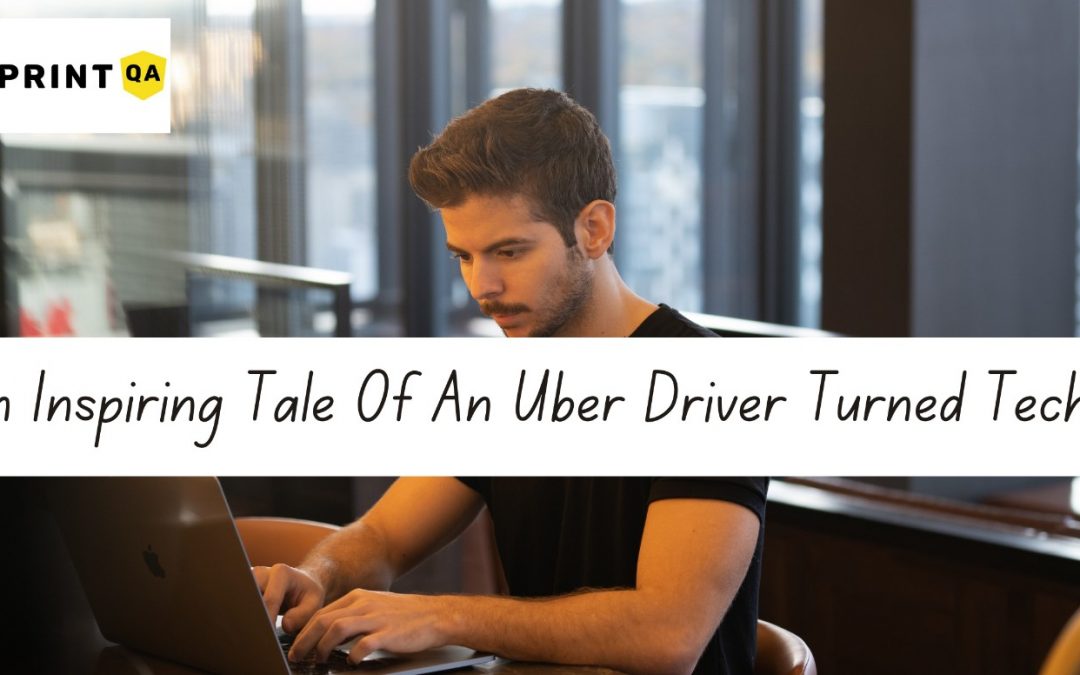 Today’s post is not about the benefits of joining a bootcamp or quality assurance or selenium. Rather today’s blog post is all about sharing an inspiring story that will bring a smile to your face and motivate you to take control. Grab a cup of coffee and read on.

Andrew was a 22 something 3rd generation immigrant living in the US and trying to make ends meet. With dreams in his eyes, he moved to New York, the city that never sleeps, to change his fate. But fate had something else in store for him. After struggling for 4 months and being left with a long list of rejection emails, he took up a waiter job at a fine dining restaurant. Not the job of his dreams, of course, Andrew pushed himself to work every day and served affluent customers their Calamari’s and Sangrias with a smile. 6 months into the job at the restaurant working tirelessly for those long hours just to make extra money, Andrew was exhausted. The only silver lining was the overflowing tip box that he bought on the first day of work. Being a charming young lad with a genuine smile, Andrew quickly became a favorite for customers at the restaurant. Thanks to that, most of the regular customers tipped him very well.

One fine day, Ben Miller, a regular customer of the restaurant called for Andrew. Ben Miller was a businessman who owned a large fleet of Uber cars and limos. He told Andrew if he was up to drive one of his Uber cars. The pay was better than the restaurant, and there was a lot more flexibility. Moreover, what Ben Miller didn’t know was that Andrew loved to drive. It was a stress buster for him. Relieved that he didn’t have to serve food, Andrew immediately took up the offer.

Andrew bought a larger box on his first day as an Uber driver; not for the tips, but to save money every month. Although it wasn’t Andrew’s dream to drive customers back and forth through 5th Avenue, Broadway, and Wall Street, he was at least happier than his previous job as a waiter.

6 months into being an Uber driver, Andrew had already saved some bucks. He bought a new laptop after his 5-year-old laptop died. One fine morning on his off day while scrolling through Facebook, he saw a QA Automation course posting by Sprint QA. Normally Andrew avoided social media because it made him feel low. Most of his schoolmates were doing well for themselves, and it’s human psychology that when you are not doing what you wanted to do, you feel low and upset seeing other people’s success. But it was fate once again. Andrew opened Facebook after a long while, and he came across the Sprint QA post. He went to the website, looked into the course, and submitted a query through the contact form. Andrew always dreamt of working in the tech industry, but he never knew how to fulfill his dreams. He had no guidance or support, so far.

Very soon, a representative from Sprint QA responded to Andrew. They had a call, and he was told to apply for the program. Since all the courses at Sprint QA are online and very flexible, Andrew had a good feeling about it, took the plunge, and applied for it. He got selected and started his QA Bootcamp journey. It wasn’t an easy journey for him juggling studies with his Uber driving job. Every morning, he drove customers around in his Uber, and in the evenings, he would attend classes. He studied till late at night and woke up at 5 in the morning. He used to get physically tired after a long day of work and studies, but he felt extremely charged up. Andrew didn’t give up. For the first time, he felt as if he was one step closer to his dream.

Isn’t it inspiring? Do you relate to Andrew, or do you know another Andrew who has big dreams but is struggling?

The moral of the story is, don’t give up. Pursue your dreams. No matter how hard your financial situation is, it’s up to you to take charge, work hard and transform your life. And the best part is Sprint QA will offer you all the needed skills. We’ll teach you the latest skills, give you hands-on experience, prep you for interviews, and negotiate the best salary.

We’re in this together, until you cross the finish line – and beyond.

Jumpstart your new tech career by becoming a Sprint student.